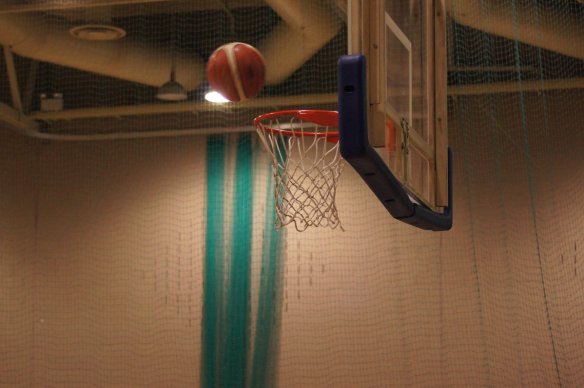 The Dragons travelled up to Aberdeen full of confidence following a strong showing against Women’s Warriors in the previous development league match and a very strong playing squad, with only Stephen Carling missing.

The team arrived pretty much in sequence in the space of 15 minutes and Gemma quickly asserted her authority,” Flyers you’ll need to change your colours”, I’m not afraid to say that I was a little bit scared.

She pulled everyone together very quickly, got her red pen out and her red dry wipe board, anyone else spot the schoolgirl error there, and we were ready to get into the warm up.

That’s pretty much my knowledge expended but the warm up did look great!

I think even the Flyers, of which there were many, were impressed.

The team started with a very strong five, Ben Leitch and Michael Mellon playing as forwards ably supported by Gemma Lumsdaine and Rhys Colliar as guards and David Birtles slipping into point.

Dragons started really impressively both in attack and defence with movement, communication and precision in almost every thing they did. Flyers were chasing shadows throughout the first quarter and 20 points were harvested without reply, Ben leading the way supported by Michael and David.

It was now time to make changes with Ronny Robb and Blair Marshall introduced into the action with both of them getting on the scoresheet, although the biggest cheer came when Rhys nailed a beautiful basket just before the half.

Flyers were now finding their form and clawed back 8 points making the half time score 28-8 to the Dragons.

The second half saw another Dragons change with Mairi Simms being introduced into the action.

The half started very much nip and tuck as the first half had ended but Flyers were now dominating possession and kept the scoreboard ticking with Dragons now struggling to find their form of the first 2 quarters, although the reintroduction of Michael helped to steady the ship, it was now a 12 point game at 34-22 to the Dragons, with one quarter to play

Not deterred, Gemma decided to try out a new tactic with four high chairs on at the same time, a quick calculation confirmed that yes we could do that and had enough points on the court.

This was a bit of a masterstroke as Dragons stormed back into the match with Ben, Michael and Blair adding to the Dragons total and the defence finding its resolute form of the first quarter, the match finished with Mairi replacing Gemma and the other four made up of the match starters.

This was a really enjoyable match with thanks due to the Grampian Flyers for their excellent hospitality, the match officials for their lovely light touch to refereeing and the table officials doing an absolutely sterling job.

From Dragons point of view it was great to see a large travelling support, ok most of them were driving the players but big shout out to Sally, Carrie, Sharon, Deborah, Ryan and Sarah, David and Owen.

Special mention to my partner in crime on the sidelines Paula “what was that foul for” Leitch.

Dragons move onto the return against Women’s Warriors on Saturday 17 February, at home, but without Ben and Mairi and I’m sure Jay and Kirsteen will be looking to put one over on us.

With a 1pm tip-off at Gardyne Campus be great to see a big support for the team.