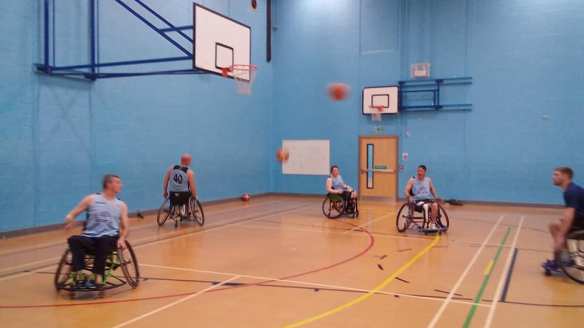 The Dragons squad arrived almost simultaneously, ok Michael was there first but for the rest of us this was quite an achievement. The match started in glorious sunshine, I know it’s not relevant but on one of the sunniest days of the year we were all indoors!

Dragons started with Gemma, Michael, David, Rhys and Ronny with Kevin Myers and Ben on the bench.

It was clear that the day would bring fireworks, unfortunately this was nothing to do with the match which started frantically with Michael conceding the tip to a girl several inches shorter than him.

For the first six minutes or so it seemed that a famous nil-nil draw may have been on the cards, but then St Mirren jumped into a 4-0, then 8-4 lead, but this was as far in front as they would get.

Ben was introduced for Ronny then Kevin for Rhys and Dragons started to build some momentum to their play prompted by Gemma’s excellent player coaching.

Score after score followed with the match going nip and tuck for the whole of the first half finishing 16-16, we knew this was going to be tough and St Mirren with their multiple interchanges were causing Dragons defence many problems.

The second half burst into life with Dragons in the ascendency very quickly and flying into a 22-16 lead, but being pegged back to 22-18 almost immediately.

The Dragons defence organised by Gemma and with Ben employing a single player press was now in complete control and St Mirren were struggling to make ground and open up shooting opportunities.

Scores were also now flowing very consistently as Dragons stretched the lead to 34-18 and Ronny and Rhys were reintroduced to the action to close out the victory.

The final few minutes brought Ronny his first 2 scores of the match, the second one being a press steal followed by an outrageous hook shot.

The match came to a close with Michael trying to beat the buzzer from his own half with a final end to end throw of the ball, which missed everything including the net, the backboard and the back wall.

A good first match of the season for Dragons and although St Mirren started the likelier side, Dragons rustiness was swept away as the match progressed and Dragons organisation was ultimately too strong for St Mirren. Now if only we could get everyone training regularly!

Thanks due to the drivers David B, Michael, David L and Sally as well as to Paula and Sally for table officiating and off field organisation, another fantastic full on Dragons team effort.

Next match is away to Phoenix first team in the Scottish Cup, the challenges just keep coming!