The 2015 RCCC Scottish Wheelchair Curling Championships were held at The Peak, Stirling, on 4-6th March. The club has not yet had one full season of Curling training, and had never played competitively against another Wheelchair team (until now competition has been against able-bodied teams locally). Despite all this though, Coach Frank felt it would be good for our curlers to get to Stirling this year and thus Dundee was represented for the first time at the national level.

The team won their first match, a fantastic achievement, but reality soon set in given that their second match was against a team which included current GB Paralympians! Overall the Dragons finished 12th of the 12 teams, an outcome which although perhaps predictable didn’t really reflect how well the guys played throughout the 3 days of competition.

There were words of welcome for the Dragons from everyone involved in the championships, and all opposing teams commented on how well the team performed given their limited experience.

We’re really proud of the guys, it’s no mean feat to have your first competitive experience be the nation’s flagship event, So a huge well done to our curlers from everyone at Dragons HQ, you’ve created history! 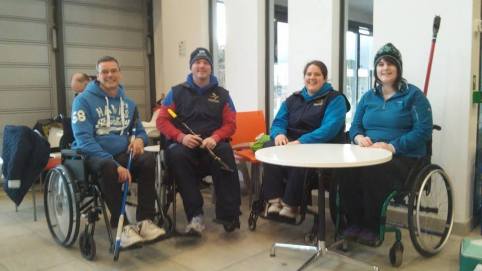